The first full appearance of Wolverine featured in Incredible Hulk #181 is hands down the creme de la creme of Bronze Age Books. Along with Spider-Man & the Punisher, Wolverine ruled the 80’s and 90’s not only in comics but on the big screen too. Every collector of every age hopes to one day have a copy of this book (in any condition) in their collection.

Portrayed by Hugh Jackman in all the X-Men and solo movies – Wolverine is the ultimate cigar smoking, alcohol drinking, tough guy with claws. He’s been ripped apart to his adamantium metal bones numerous times and always rebuilt himself. He’s a man mentally torn – whether from his erased memories or his love interests lost. His scowl could literally inflict pain on a common man. 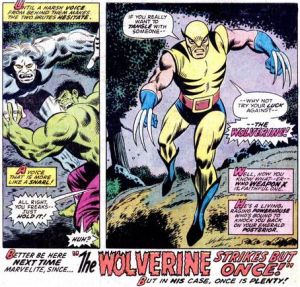 Technically Incredible Hulk 180 is the first appearance of Wolvie, which features Logan on the last page of the book, foreshadowing his full appearance in the next issue. So why isn’t issue 180 a Holy Grail? Well first of all, cameo appearances rarely command as much value or demand as a full first appearance. But additionally, issue 181 has Wolverine on the front cover epically battling the Hulk. That iconic cover has been “homaged” hundreds if not thousands of times by other artists over the decades, almost as a right of passage for illustrators. The only other book which has been mimicked more would probably be Amazing Spider-Man #300 (the first appearance of Venom).

A contributing factor to the value of this book is that it had a Marvel Value Stamp which were commonly cut-out. Many kids in 1974-75 cut out the Marvel Value Stamps and tried to collect them all which were featured throughout hundreds of different Marvel titles. It’s kind of like hearing the story of the dad who used to put Mickey Mantle rookies into the spokes of his bike wheels.

Prices of this book have gotten out of reach for the casual collector. Low grade copies can still fetch close to $1000 and a perfect graded copy has sold for over $30,000 numerous times in the past 2 years!

In comparison, to other key issues from the Bronze Age.

If you think you might have this book or others from 60’s through the 80’s, we’d love to give you an appraisal and possibly buy your collection! Contact us today